New Chapter: The Aesthetics of Asymmetrical Warfare: Cinema’s representation of Conflict in the 21st Century 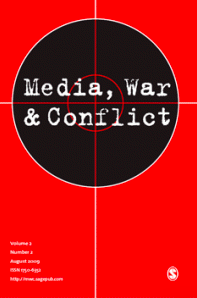 Recently delivered a chapter for the Handbook on Violence in Film and Media, edited by Steve Choe and Lina Aboujieb for Palgrave Macmillan, due for publication 2021. This will be the second paper from my PhD project “The Gulf War Aesthetic? Certain Tendencies in Image, Sound and the Construction of Space in The Hurt Locker”, following the publication of an interview with Kathryn Bigelow and Mark Boal published in Kathryn Bigelow: Interviews for the University of Mississippi Press.

Have been working on this paper for a while,  delivering a working version at a conference at Maynooth University in September 2019 and extended the ideas into this longer version. The chapter asserts that the adoption of innovative production practices within the recent war films are, in part, a response to representing the nature of recent conflicts complicated by unknowability and complexity – what Joshua Clover has described as the “unnarratability” of asymmetrical warfare; where new modes of conflict  can be distinguished from the “old wars” of the 20th Century in terms of their politics, use of technology and combat tactics.