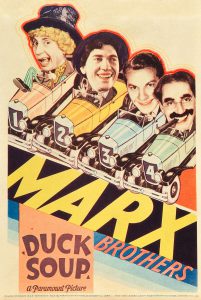 the last three years my colleague at Falmouth University’s School of Film & Television Dr Neil Fox and Brighton University Principal Lecturer Dr Dario Llinares have been hosting a fortnightly podcast, with all of the episodes collated here http://www.cinematologists.com.

Regularly in the iTunes Top 20 for Cinema, I’ve chipped in a few times in the on stage discussion. As part of the BFI Comedy Season, Neil chose Leo McCarey’s 1993 gem Duck Soup. We talk about my lack of knowledge of the Marx Brothers – to cries of ‘Shame’ from the audience. The screening was a lot of fun. Click the link below to listen: