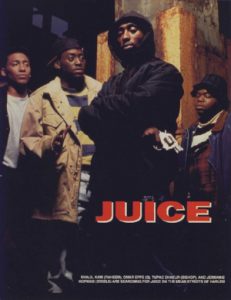 For the last three years my colleague at Falmouth University’s School of Film & Television Dr Neil Fox and Brighton University Principal Lecturer Dr Dario Llinares have been hosting a fortnightly podcast, with all of the episodes collated here http://www.cinematologists.com.

Regularly in the iTunes Top 20 for Cinema, I’ve chipped in a few times in the on stage discussion. Neil chose Ernest Dickinson’s Juice (1992) for the summer term. We talk about our introduction to hip hop, to the ‘hip hop’ movies which emerged through this period and Tupac’s performance. The screening was a lot of fun. Click the link below to listen:

Dr Kingsley Marshall is a film composer, producer and academic. Head of Film & Television at the CILECT accredited School of Film & Television based within Falmouth University in the UK, the subject area consists of 40 staff working with 500 undergraduates, supplemented by a postgraduate community studying from MA level through to PhD. Kingsley’s research and practice primarily orientates around the use of sound (including music and effects) in cinema and television, and the production of short and micro-budget feature films. He executive produced Wilderness (Director: Justin John Doherty, 2017) which won 13 awards at international film festivals since making its premiere at Cinequest, and Mr Whippy (Director: Rachna Suri, 2019). In 2018 he co-produced with Neil Fox the short HP Lovecraft adaptation Backwoods (Director: Ryan Mackfall, 2019), which began its festival journey in 2019. More recently, Kingsley recently completed the score as composer on a film project - Hard, Cracked the Wind - with director Mark Jenkin and production company Early Day Films. The film premiered at Encounters Film Festival in September 2019. For over twenty years he has worked as a journalist, interviewing filmmakers, musicians, and designers for over 30 publications and broadcasters worldwide, written album sleeve notes and biographies for over 100 artists, and contributed to anthologies on hip hop and soul. He can be found on Twitter as @kingsleydc