A shared love of Detroit techno and Chicago house saw Mark Pritchard and Tom Middleton form the Evolution and Universal Language labels in the early nineties. Material as Reload, Global Communication and the Jedi Knights followed, with the use of the latter prompting a rumoured phone call from an unhappy George Lucas. As Tom leaned more towards chill out and deep house, so Mark’s recordings as Use Of Weapons, Harmonic 33 and 313, Troubleman – and most recently as Africa Hitech for Warp Records – continued pushed the envelope of breakbeat music.

Mark features a lot in my record collection with Troubleman, NY Connection, Harmonic 313, Link and a slew of other pseudonyms. While working with Droppin’ Science’s Danny Breaks (as Use of Weapons, seek out the records, they remain superb) he tagged along with Danny to play a club I was involved with. I subsequently interviewed him about the project (read it here) for a magazine, and a couple of years after that he came down to play some records of his own.

His first DJ set for Deconstructed Live is a cracker, lots of early millenium hip hop classics, a few funk rarities (special mention for Love Unlimited Orchestra’s Strange Games, dropped half an hour in, one of my favourite records of all time) and a dash of his own material. All killers, no fillers.

For your listening pleasure, here is the first half of Mark’s set for Deconstructed Live. 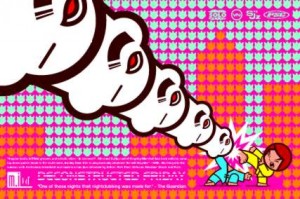