I’d interviewed Hidden Agenda’s Jason Goodings for a large feature in Breakin’ Point magazine on a phenomena where drum & bass artists were switching to other genre, before inviting him down to Deconstructed Live, to play session #31 Jason, together with his brother Mark, had emerged in 1994 with a rare groove influenced take on drum & bass which first surfaced on Goldie’s Metalheadz.

Their sound quickly diversified into other styles however, with their album for Switzerland’s Straight Ahead using rippling percussion to shift from late night house to slippery instrumental hip-hop, reflecting the eclecticism of their own superb Zest and the Dispatch label, where intricately constructed deep grooves play host to a bassline with plenty of punch for the floor but enough details for the casual listener. Jason  took the long journey down from Newcastle laden down with slippery funk and soul. 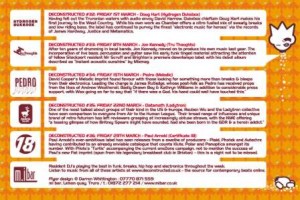